God Carried Me Through Cancer – Episode 233

Choona Boiano, former breast cancer patient who had a family history of cancer and survived, shares with Rev. Percy McCray that she was not really surprised when told of her diagnosis. She “knows that tomorrow is promised to nobody,” but yet declares that she is here and acknowledges, “I know that God has something for me somewhere, sometime!” 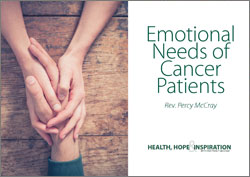 Choona Boiano was four months behind on her yearly routine mammogram, and after persistently being contacted by her physician’s office of nine years, she finally followed up on taking her diagnostic test. What followed was that she was asked to perform additional scans, which confirmed she had cancer. Choona was not a stranger to working through bad news, as she had lost several family members from cancer, including her father, before her diagnosis.
Choona shares with Rev. McCray that despite experiencing multiple trials and challenges in her life, her family would not allow her to believe her diagnosis would be the end of the road. She confidently states that along with good medical care, and strong family support, that God was ultimately the driving force working within her to push through her medical process.
God was the key “element” that allowed her to keep moving forward. “God, He’s the only one … He carried me when I couldn’t carry myself, when I couldn’t walk anymore …”
Choona exclaims, “You just conquered cancer, girlfriend, what are you waiting for …” So, after being deemed cancer free, she pursued an unfulfilled desire of wanting to sing and talks of taking voice lessons. “The things I had feared to do, I’m kind of fearless now,” Choona declares.
“Just the thought that I have time, more time that I can wake up tomorrow” stirs the fire of her hope.

Tips to Keep the Faith During Hard Times

The information provided here is for educational purposes only. In no way should it be considered as offering medical advice. Cancer Treatment Centers of America assumes no responsibility for how this material is used. Please check with a physician if you suspect you are ill. Also note that while Cancer Treatment Centers of America frequently updates its contents, medical information changes rapidly. Therefore, some information may be out of date.

Learn what CANCER TREATMENT CENTERS OF AMERICA® IS doing to protect patients amid the coronavirus outbreak.